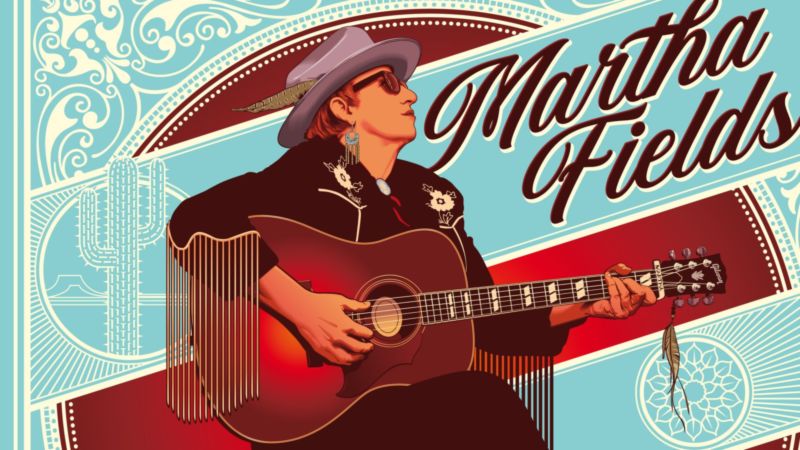 Martha wrote, self-produced and recorded this ‘straight from the heart' 12 song opus while in lock-down in the SW of France - with her band of hotshot pickers and then mixed in Nashville by Sean Sullivan (Butcher Shoppe Studio - John Prine). This Texas Troubadour embodies a hundred years of Country, Folk, Bluegrass and Rock'n'Roll history, in a spirit of authenticity and palpable sincerity. Martha's seemingly absinthe tinged vocals and her dauntless songwriting are complimented by twangy guitars, dobro, banjo, mandolin, violin, Hammond organ, double bass, piano, even some brass. Martha's last two albums were in the top 10 best of the year albums on the EUROAMERICANA CHART. With her musical roots running deep in Appalachia, Texas and Oklahoma, her sound reflects this diverse DNA – charting her own Americana route. At a young age, she shared the stage with Ricky Skaggs and Merle Travis and later even some whiskey soaked nights with Gus Hardin and the rest is history. “Everything we love!” Rolling Stone France. “A perfect vision of 21st century Americana talent. “ Blues Matters – UK. “Magic – a dream team.” R2 (Rock'n'Reel). “Martha is a ”brave songwriter, managing to somehow combine the anthems of Guthrie and the Southern documentation of Gentry.” Paul Kerr, UK (Blabber & Smoke). For the last 6 years, Martha has toured extensively across Europe from the UK to France, Spain, Netherlands, Belgium, Italy, Switzerland and even Lithuania. She's played some of the most prestigious Country/Americana festivals and stages across Europe such as Southern Fried – Perth, Scotland, Country2Country, 02, London, UK, Craponne sur Arzon, France, Glasgow Americana and many others. PRE-ORDER NOW "DANCING SHADOWS" released (2018) An Americana Tour de Force with bona fide Southern swagger, Martha Fields brings her ghosts to life in her new album “DANCING SHADOWS” . Martha illuminates her past and present in this ambitious project - 14 songs and 2 continents, awash in dark and moody tones, saturated with strong, defiant characters, overflowing with grit and soul, sprinkled with the occasional honky tonk respite, all generously infused with her own authentic southern groove. Carving her own route through the “Americana” terrain of folk, blues, country, rock and bluegrass, Martha recorded with her touring, dream team of musicians at the top of their craft. Manu Bertrand, Serge Samyn, Urbain Lambert, Olivier Leclerc and Denis Bielsa - all able to equally render the bittersweet beauty of her ballads as well as the bodacious bluesy and rocking repetoire. With dobro, lap steel, guitar, slide, double bass, violin, drums and the occasional mandolin and pedal steel, her band perfectly compliment her emotionally charged vocals with their stellar playing. Monica Taylor (the Cimmaron Songbird) and Travis Fite, both Okies with Cherokee blood, provide luscious harmonies. With her musical roots running deep in both Appalachia and Texas, Martha and her superb band take you on a passionate, soulful, winding voyage through the American South. "SOUTHERN WHITE LIES" was the #2 CD of 2016 on the EuroAmericana Chart and is available NOW. (Purchase below). Rolling Stone says “Everything we love” “Impressive!” - Scotland’s largest newspaper The Herald. "Musical Magic - a DREAM TEAM - R2. "Classic Country Twang and Powerful Vocal". - Maverick "SOUTHERN WHITE LIES" is an Americana tapestry that weaves together her Appalachian birthright, soul and struggles. Martha's voice and songs are both intimate and powerful – taking listeners on a twangy - heart-pounding ride through a range of country, blues, folk and bluegrass, steered by a band with extremely impressive acoustic chops. A Southern Gothic Folk Opera searching for self-discovery, a sense of place, veracity and Martha’s musical taproot. The album is filled with mature mountain twang, crackerjack dobro, fiddle, banjo, guitar, resonator, mandolin and double bass - awash with beautiful harmonies and backing vocals throughout. Southern White Lies CD Soul on the Move (Track 1 - Southern White Lies) "A must have album that gives you an honest musical orgasm !!! Straight to the top of the Americana / blues / roots scene" (Beale Street). Evoking the expressive power or Guthrie, Dylan or Lucinda ...every song come from the heart. (Roots Highway). Loretta Lynn would be proud. Martha has set the benchmark very high. (Rocking Magpie) Martha's Americana CD "LONG WAY FROM HOME" was #17 on the FAR chart for 4 months in 2015. All original compositions, a real Americana soundtrack - country, country rock, Texas boogie and folk. The CD received universally positive reviews. Long Way from Home CD "Just when you thought Country music had lost it's edge, Texas Martha sounding a bit like Lucinda Williams country cousin, fronting the Tennessee Three, has come along and not just blown the dust off of our beloved Country music, but given it a hefty kick up the backside at the same time".(A. Harrison, The Rocking Magpie). "All the songs were written by Martha, who plays her part with determination and conviction, freshness and an obvious deep love for these sounds. It is this spirit that pervades all ten songs, making the album a success and one of the most enjoyable in recent times. We experience an alternation of truly reflective, poetic and solid honky tonk, united by the common denominator of the talent and warmth of Texas Martha. This band is a must to mark in your agenda and see in concert (Remo Ricalone, Lonestar Times) Martha Fields (USA) is available for booking throughout the USA and Europe. Please contact: martyfi