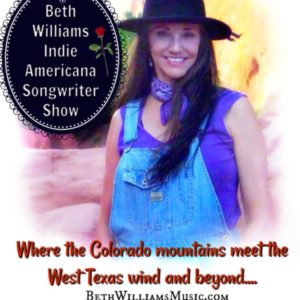 Transplanted from Texas to Colorado in 2012, Beth Williams is a singer songwriter, storyteller, entertainer, and sometimes yodeler who has been described as a “Hippie Bohemian Cowgirl”. An ACADEMY OF COUNTRY MUSIC NOMINEE for BEST NEW FEMALE VOCALIST OF THE YEAR, Williams was also voted BEST INDEPENDENT FEMALE VOCALIST in CASHBOX magazine and BEST FEMALE PERFORMER in the Independent News. Her songs have charted in BILLBOARD and CASHBOX as well as numerous Indie charts.

“Yes, she is a wonderful singer, beautiful voice…. But there’s something more. This songwriter does “message music”, she makes the spirit soar… I love it!” KACQ/KCYL RADIO. The SAN ANTONIO

EXPRESS-NEWS writes “No sappy writer, no overt heartstring tugger, Williams instead is the kind of person who walks on the sunny side, uses common sense, sees the glass as half full & finds the silver lining in dark clouds.” And from KNBT Radio: “Beth’s songs are not written as much as crafted, her soaring vocals add just the right amount of electricity to each track. When you hear her psychedelic yodel-chants on O-D-I, you’ll laugh out loud, and you’ll be hooked for good.”


Beth’s unique approach and creative abilities as a songwriter & guitarist build an eclectic bridge between folk, Americana, country, blues, pop, gospel, yodeling and roots music. Soaring vocals, artful lyrics, engaging smile and the ability to closely connect with her audience make for a powerful combination. Her music has received airplay in the U.S. and overseas since 1987. With 9 CDs available on her own Willow Creek Record label, her songs have been and are currently being played on radio stations around the world each week.

The owner of Hill Country Recording Studio on the Western Slope of Colorado, Beth not only records her own music but is also a internet session singer for studios in Nashville, Texas and Colorado. She’s able to add harmonies and lead vocals on projects without ever leaving Colorado. Clients from all over the world hire Beth to be the lead vocalist or harmony singer on their songs, and often to produce full productions of their songs. She is also a professional Voice Over Artist.

Since Feb. 2017, Williams has produced and hosted the Internationally Syndicated BETH WILLIAMS INDIE AMERICANA SONGWRITER SHOW “where the Colorado mountains meet the west Texas wind and beyond” which currently airs on 50+ terrestrial and internet radio stations around the world. Beth is currently in pre-production on several new CD projects with a planned 2020 release. Her latest release, HAVE A GREAT DAY, is an original song about letting go of the past and choosing to move forward.

Born on Ramey Air Force Base in Puerto Rico, the nomadic life of the military led Beth’s family to Pakistan, the Philippines, Texas, Florida, Georgia, and Okinawa twice, all before she turned seventeen. Between tours of duty, the family flew back to the USA, and drove from California to Georgia to visit relatives. During these hot, dusty drives, Beth recalls her dad singing to help pass the time. She believes it was the comforting sound of her father’s resonating voice, and mother’s gift for playing piano that instilled her love of music early on.

Beth’s passion for singing and songwriting began as a child. While living on Peshawar AFB in Pakistan between the ages of 12 and 13, Beth happened upon a lone GI sitting on the bleachers of a deserted baseball field, singing and playing a guitar. Her destiny was sealed as she ran home to tell her parents she wanted to sing and play guitar. Her parents bought her a $10.00 guitar at the PX later that same year when they were relocated to Okinawa. While there, Beth entered the Talent Show at Kubasaki High School and won First Place singing an original song.

Moving with her family to San Antonio, TX at the beginning of her senior year of high school, Williams immediately began her full time musical career after graduating, delighting Texas audiences, touring Central Texas, military bases and overseas. After some years of struggle, Beth Williams’ musical endeavors seemed to be paying off as she began to make her mark in the commercial field finding her songs in the National Charts right in the middle of Steve Warner and Roseanne Cash.

Just as her career was heading mainstream she began moving in the opposite direction with her songwriting and musical abilities. Williams set about the task of becoming an independent artist by starting her own record label, Willow Creek Records and several years later, taking her artistic independence one step further she opened a small Pro Tools recording studio, Hill Country Recording plus Video. Her reputation as a excellent vocalist and harmony singer has brought Williams clients from all over the world who send her tracks via the Internet to add backup vocals to their projects or sing lead on their demos.

In 2006, duty called Williams to take a sabbatical from performing to become a full time caregiver for her ailing 75 year old father. At the same time, she and her husband were granted custody of their 2 year old granddaughter, Mozelle. Feeling a higher calling, she made the decision to quit touring and performing for a number of years. Beth was blessed to have cared for her father until his passing. She and her husband continue to raise their granddaughter Mozelle who is now 15 and a freshman in high school. .

Beth embraces her role as “troubadour” performing at festivals, house concerts and other listening venues. She is currently in the studio working on several new CDs with planned release dates in late 2020.

“Beth is blessed with a beautiful singing voice that has the dynamics to go from a whisper to the full power of cathedral bells.” says Austin Americana.

“Besides the obvious, great singer and guitar player, Beth Williams bares her soul in her songs and performance. This is a brave and good thing.” LLOYD MAINES