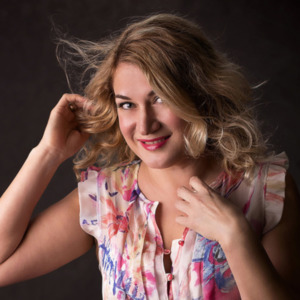 Bio
For anyone who might be unfamiliar with the term ‘triple-threat’, let me assure you that it’s nowhere near as aggressive as it might first sound. In fact, it’s quite the opposite, and as ways to describe someone go, referring to them as a ‘triple-threat’ is definitely a compliment. In the world of entertainment, it’s often a way of describing someone who can sing, dance, AND act, too. In the world of Irish country music, Russian-born Larissa Tormey very much belongs in the triple-threat category.

Larissa, who has been living in the charming little Westmeath town of Kilbeggan in the Irish midlands since 2001 – thanks to a fairytale-like moment involving her , an Irish farmer on holiday in her native Moscow, and Cupid’s bow – is a classically trained vocalist, a pianist, AND a songwriter. Consider the fact that so much talent is wrapped in a personality that’s made up of equal measures of sparkle, fun, and determination, and it doesn’t take long to figure out why she’s already on album number three since moving to Ireland.

While classical, contemporary, jazz, pop, and folk music were all ingredients in the melting pot of musical styles that influenced Larissa before her move to Ireland – and indeed, all remain important elements of her creative side – it didn’t take long for Larissa’s heart to entwine itself with the rolling rhythms and melodies of Irish country music. In June of 2014, Larissa’s talent was recognised with an invitation to appear as a guest singer at the YOUBLOOM Global Music Village, a conference for international artists which was held in Dublin.

In November of 2014 Larissa released her debut album, a statement of confident intent as much as a collection of songs, ‘Perfect As I Am.’ But the magic of music is something Larissa has long been committed to using, whenever possible, for healing and helping, and not merely entertainment. Having already released ‘The Christmas Wish’ as a charity single supporting the Share A Dream Foundation in 2013, Larissa repeated this act of compassion in October of 2014, with the song ‘Special Christmas’, in aid of the Special Needs Parents Association, with the track even being named one of the top 6 Irish Christmas charity singles of that year by the Irish Independent.

Larissa’s appreciation of country music finally began to approach full-bloom in 2015 when she was persuaded by her friend, Belfast songwriter B.G. Pollock, to record her very first country single, ‘Only a Woman.’ The video premiered on Hot Country on Sky TV, Europe’s longest running country music show, and the single - written by Pollock - hit the Top 100 Country Singles Airplay chart in its first week of release.

By the time 2017 rolled into view, Larissa had been busy in the studio working on her second album, the enthusiastically titled, ‘God Loves A Trier’, which went to radio on the 17th March. It was no coincidence that Larissa chose St. Patrick’s Day to introduce this body of work to the world, compromised as it was of tunes with a strong traditional Irish folk influence, and more with an eye – and an ear – on the country dancefloor.

‘God Loves A Trier’ features the talents of steel-guitar maestro Sarah Jory, Nashville guitarist Daniel Parks, and Charles Arkins bringing the violin to life, just three reasons why this album has proved to be a joy to the listener’s ear from start to finish. With production credits going to David McCunne (who also worked with Larissa on her debut album) and Pete Ware, who has been the man behind the desk for artists the stature of Charlie Landsborough and Mary Duff, and a track-listing comprised of mainly original tunes from Larissa and B.G. Pollock, the album’s impact led to an invitation to perform at the opening of the Hot Country TV Awards Concert, the most popular and prestigious event of its kind in Ireland.

It would seem that Larissa’s second album was very aptly titled, and that God, indeed, does have a special place in his affections for the triers who hustle and harry enough to give Lady Luck her chance to get in on the action, too. In June of 2017, Eddie Rowley, Ireland’s leading entertainment columnist and writer, placed Larissa firmly in the spotlight and centre-stage with a feature in the Sunday World newspaper headlined, ‘Meet Our Mos-Caw Girl.’ There was no slowdown in July with Larissa interviewed by Brenda Donohue for R.T.E. Radio 1’s ‘Countrywide’, and later in the month being interviewed by Shay Byrne of the Keep It Country TV channel. Before the year was out, Larissa had also been the subject of a special feature on R.T.E. 1’s long-running TV show, ‘Nationwide.’

2018 began with Larissa’s steady rise to prominence on the Irish country scene continuing, when she was honoured with the Cultural Crossover Country Artist of the Year Award at the Sunday World Music & Entertainment Awards. Her third album, ‘Cowgirls Don’t Cry’, hit stores in March and her take on that anthem of Irish heartache ‘Danny Boy’, in which Larissa sings part of the song in her native Russian, immediately won her an array of new followers and fans that fell in love with the tenderness of her rendition of such a timeless classic.

In May of 2018, Larissa was once again invited to perform at the Hot Country TV Awards Concert, and was also announced as one of the four artists shortlisted by IMRO for the honour of being named Best Irish Country act at the Irish Post Music Awards, a category in which she was joined by country’s big-guns Nathan Carter, Cliona Hagan, and Derek Ryan.

Larissa’s single, an ever so delicately handled version of ‘The Wind On The Hill’, also comes with touching story of how Larissa first fell in love with this song by hearing the late Big Tom McBride perform it on the Hot Country TV show. Larissa then met the man himself at the 2017 Hot Country TV Awards Concert, and a photo of her sitting with him in the green room that night – on his knee, would you believe – now holds pride of place in the Tormey household. Only a couple of months later, during an interview with Michael Commins for his column in the Farmers’ Journal, Larissa discovered that Michael had actually co-written ‘The Wind On The Hill’ with Pat McKenna. Heartbroken at the news of Big Tom’s passing - like the rest of the country music community – Larissa knew there was only one way to pay tribute to the Castleblaney man. But when she posted the video of herself singing ‘The Wind On The Hill’ on her Facebook page, it racked up thousands of views in next to no time at all. In that moment, the decision to professionally record and release ‘The Wind On The Hill’ was made for Larissa, by what seemed like a gentle dance of fate and circumstance, and as always, by what Larissa could feel in her own heart.

In 2019 Larissa released numerous country singles, towards of release of her next country album in September 2020, and most of them reached the top airplay charts in Ireland and other countries. She recently released an acoustic EP “Inner Angel” featuring her as an excellent pianist and a songwriter.

Two of her latest videos “Only My Heart” and “Inner Angel” reached top 10 best Irish Videos Chart… With performances at the Hot Country TV Awards concert, and appearances on The Late Late Show and on Nationwide on national television, not to mention a nomination for Best Country Act at the Irish Post Awards to her credit, Larissa has shown that no stage is too big for her talent. But Larissa is about more than just her talent, as anyone who has enjoyed time in her company will testify. Her positivity and energy, perfectly complimented by a sense of style and elegance, make Larissa a natural entertainer, on stage and off.

So, what’s next for Larissa? Well, only God knows yet. But we’re already sure he loves a trier, and sometimes that’s all you need to know. And whatever happens, we can be absolutely certain of two fact: there’ll be more music to come from this triple-threat beauty, and she’ll keep on putting her Russian heart into Irish country.
https://youtu.be/L6purilFKq8

This broadcaster is not presenting at any time